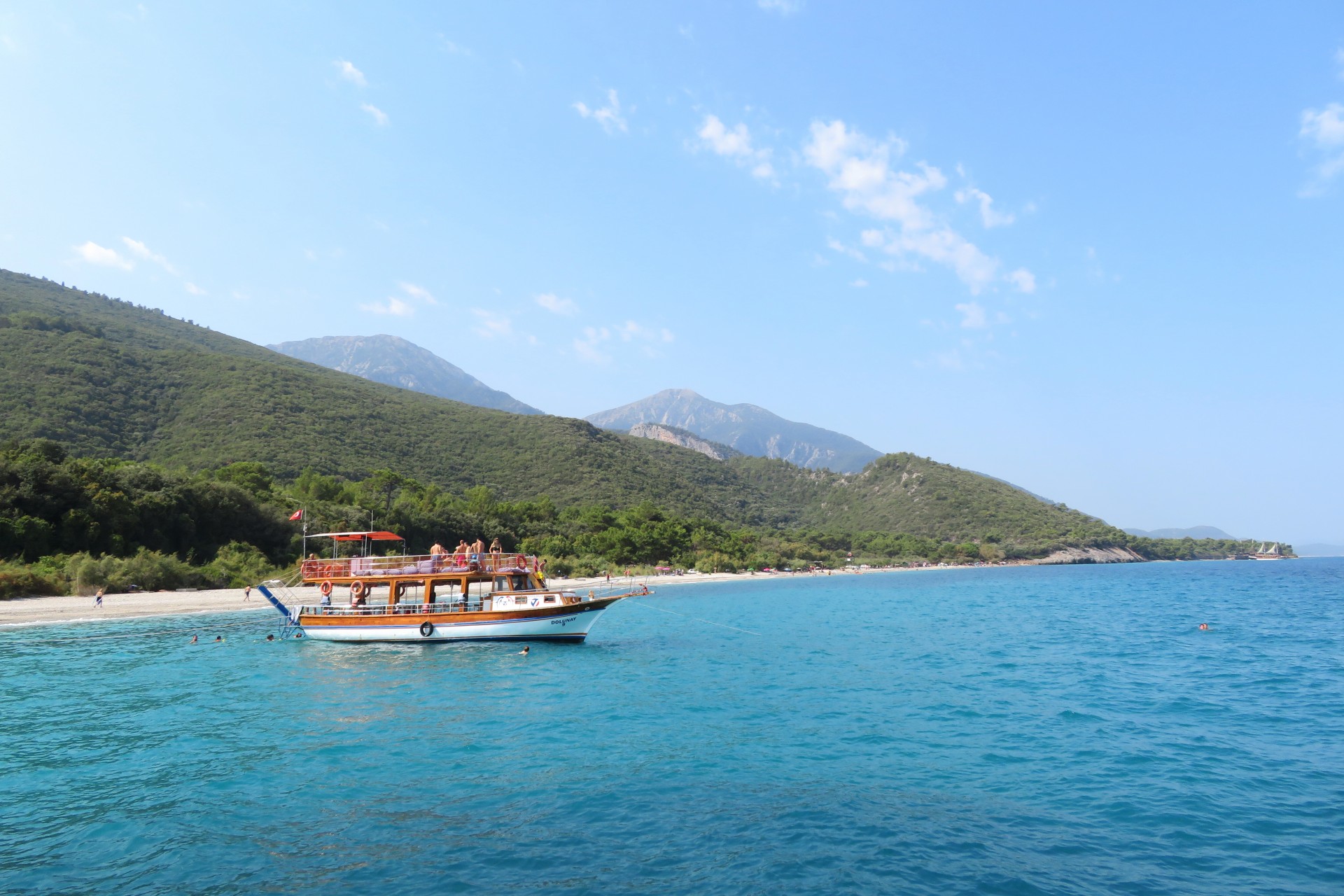 Zeus Cave is a very attractive and interesting cave located at the entrance of Guzelcamli Dilek Peninsula National Park in Kusadasi, Aydın. The cave is also the part of the many mythological stories that would amaze you. Besides all of these myths, its own natural beauty is another thing that you should witness. If you are coming to Kusadasi regions for a holiday to enjoy beautiful beaches of Turkey then you should spare some of your time and visit Zeus Cave and Dilek Peninsula.

Zeus Cave is located about 100-150 meters before the entrance of the Dilek Peninsula National Park at the foot of the hill. Basically, the cave is an extraordinary natural beauty consisting of very deep, small pool-like puddles created by the water source coming out of it. These deep green and blue small pools formed as a result of accumulation are a centre of attraction of the visitors.

Mostly, local people and tourist use these pools to cool off due to hot weather. There is also an ancient city named Panionion located at the top of the hill where you may think to visit during your time in Kusadasi. Also, there some myths about the cave. It is assumed that the cave got its name from the Zeus. Instead of this myth and the name of the cave, there are no historical or cultural remains on the cave. However, its natural beauty worth to preserve and protect.

There is a mud coming from the bottom of the big rock inside the cave is another limelight for the visitors. People rub the mud on their face and wait for the dry of it. Considering the high number of visitors every year coming to the Zeus Cave and Dilek Peninsula it may be hard to find enough mud for everyone. If you are keen to find it you need to dive in around 4 meters depth of the cave but beware of the very cold water!

There are different stories about the Zeus Cave. One and the most known stories are about Zeus and Poseidon. When the Zeus who was the God of Skies angered his brother, Poseidon who was the God of the Seas goes to the cave to escape from his wrath and triple pitchfork and rest and bath. In another story, it is told that the queens swam in the cave while kings were in the meeting. Meeting of the kings was held at the Panionion Union located at the top of the hill. In addition to all these stories and myths, it is rumoured that those who entered the cave would see the reflection of Zeus’ face if they looked up carefully in the cave.

The entrance to Zeus Cave is through an opening of approximately 30meters. In the cave, which took its present form as the limestone rocks eroded the groundwater, water-filled the sinkholes and formed pools. The inside of the cave is cool in summer and warm in winter. As for the temperature of the water, it is around 5-10 degrees in summer and winter. Ice-cold water is a good alternative, especially for those who want to escape from the extreme heat of summer. If you want to swim in Zeus Cave, it is worth reminding that you should wear non-slip shoes, taking into account the roughness of the area.

If you would like to visit the cave please know that there is no opening or closing hours. However, it is not recommended to enter the cave and the water at night due to sharp rocks and security reasons. Also, please note that the depth of the waters may reach up to the 10 meters. Since Zeus cave is a place that has come to the fore with lost divers, its warnings should be considered. There is no entrance fee for the cave but if you would like to enter the Dilek Peninsula National Park you should pay for it. I will give information about it in the following sections.

How to Go to the Zeus Cave

If you come to visit the Zeus Cave you should visit the Dilek Peninsula, National Park. It is same for if you come for the park 🙂 Dilek Peninsula National Park; The botanical garden, where almost all the plants naturally coexist on the coasts from the Mediterranean to the Caucasus, which is unique in the world, is a natural land area with raptors and wild animals and the underwater riches surrounding it, on the other hand, hundreds of birds It is a delta with a rich variety of fish and natural wonder with historical and cultural richness surrounding it. The National Park, which has a total area of ​​27.598 hectares within the borders of Aydın province, is within the boundaries of Kusadasi, Soke and Didim districts.

10,908 hectares of this area belongs to Dilek Peninsula, which was declared a National Park in 1966. Büyük Menderes Delta adjacent to the south of the peninsula was included in the National Park in 1994; It is 16,690 hectares in size. Dilek Peninsula Büyük Menderes Delta is important not only nationally but also internationally. The National Park has the distinction of being the unique nature museum where the plant species existing in all Anatolia from the Mediterranean to the Black Sea are naturally seen together. Due to this unique diversity, the Dilek Peninsula has been accepted as the “Flora Biogenetic Reserve Area” in the European Biogenetic Reserves Scheme by the Council of Europe.

The most important water resource of the Büyük Menderes Delta, located just south of the peninsula, is 584 km. the long Büyük Menderes River. Delta is a flooded wetland that includes many lagoons, salt marshes and mudflats, which are the products of this development process, in the mouth part where morphological development is rapid. This area is of international importance due to its biodiversity, endangered species and endemic species, and is protected by the international Ramsar, Bern and Rio Conventions and the Barcelona Convention.

Dilek Peninsula National Park offers you a number of beautiful beaches to enjoy the sea and sun. There are a couple of small but also very nice beaches along the peninsula where you can enter the sea. The first cove of the park is the Icmeler. This one is the most crowded one due to its location where is very close to the entrance of the park. The other ones are the Kavakliburun cove, Karasu cove and Aydinlik cove.

Besides these main coves, there is plenty of small one without any facilities you can use. Please also be careful about the boar that may come very close to you to steal your foods. Swimming or sunbathing is not the only activities you can do at the park. Fishing, bicycling, picnic, hiking, photography wildlife watching and bird watching are the other activities that can be performed at the Dilek Peninsula National Park.

Don’t Forget to Do These

When you come to the Zeus Cave and Dilek Peninsula National Park don’t forget to do the thing in the list below to maximize your experiences. Also, please check the interactive map below to find all details about the region.

Where is Zeus Cave?

Zeus Cave is located very close to the Kusadasi city center and very next to the Guzelcamli district.

Is there a fee to enter the Zeus Cave?

There is ticket or entrance fee for the Zeus Cave and it is totally free for visitorts 7/24.

Is it worth to visit Dilek Peninsula?

Definetly yes! Dilek Peninsula is one of the center in Turkey and the region for the natural life.