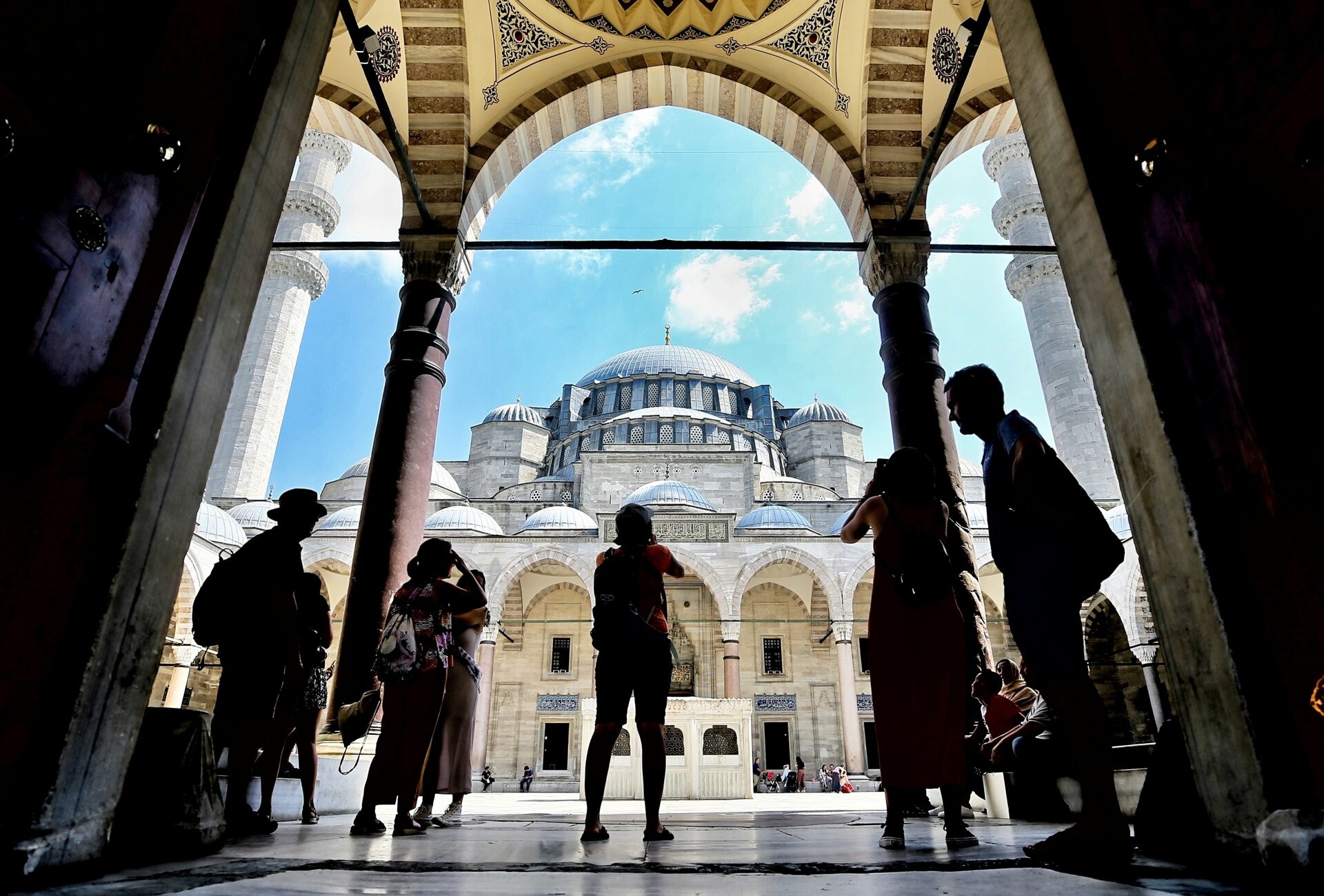 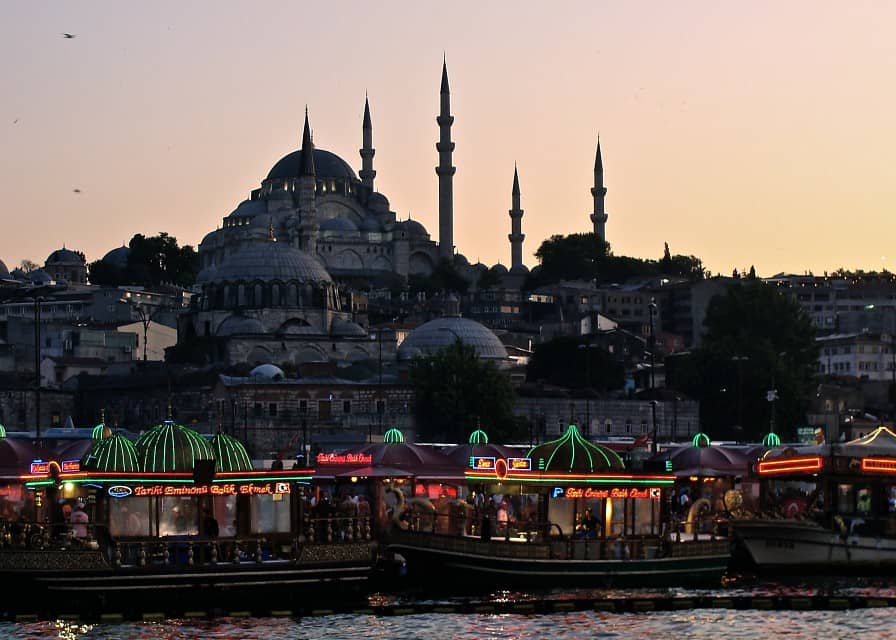 Rustem Pasha Mosque from the Galata Bridge. Bigger Mosque in the back is the Suleymaniye (Source).

This great mosque is built by the great Ottoman Artictech Sinan and completed in 1557. The stunning Suleymaniye Mosque dedicated to the great Ottoman Sultan, Suleyman the Magnificent. Sultan Suleyman’s reign over the Ottoman Empire was the longest one all over the other sultans. The structural properties of the Suleymaniye Mosque are mesmerizing like the other works of the Artictech Sinan. The main dome of the mosque is around 26.5 meters diameters and 47 meters high from the ground. Because of the geometry mosque seems very big and can be seen from far away. When you go to the Suleymaniye please stand at the center of the dome and spend a couple of minutes to watch the interior of it. There are 128 windows and 4 minarets at the mosque.

Renovations of the Mosque

Like many historical buildings in Istanbul, this mosque suffered from natural disasters and wars. It was partly damaged during the great fire in 1660. After the fire by order of the Ottoman Sultan Mehmet IV, architect Fossati renovated the mosque. But he renovated the mosque into a different style, a baroque one. It was totally against the architect Sinan. because he was always tried to build the simplest and plain religious building. Renovation of Fossati changed this identity of the Suleymaniye Mosque a bit.

Mosque once more suffered during World War I (The Great War). During the war, the mosque’s courtyard was used as weaponry storage and an explosion on the storage cause partial damage to the mosque once more. The latest and biggest renovation works carried out by the Turkish government by the year of 1956. From that date, Suleymaniye Mosque is regularly maintained.

During Ottoman time, mosques were the place for gathering, especially the big ones like the Suleymaniye Mosque.  The mosque is not only the mosque where you came just to pray and leave. After or before praying you could talk with the other people and get to know each other. In Turkish mosques like this called “Kulliye”. On the site of the big mosques like the Suleymaniye Mosque, there are medrese (religious school), a soup kitchen for homeless, caravanserai for travelers (kervansaray), library, a small bazaar and couple of tombs. Even today some of those facilities are in use.

Did you watch the Muhtesem Yuzyil tv show? It was the story of the Suleyman the Magnificent and  Hurrem Sultan. Even if you didn’t watch it not important. Here is the resting place of the Suleyman the Magnificent and his official wife Hurrem Sultan’s (Roxelana) tombs are in here. You should see the tomb of them. Tombs are decorated with precious stones, metals, and stained glass. Architect Sinan’s tomb is also in here. Meeting of the greatest! You can find his tomb on the north-western part of the Suleymaniye Mosque.

Where is the Suleymaniye Mosque?

This unique historical landmark is located very close to the Galata Bridge and Emionu ferry stops. You can even see the Suleymaniye Mosque from Karakoy, the other side of the Golden Horne. If you are coming to the Eminonu from the other district of Istanbul you will probably get off from the public transport at Eminonu tram station, Eminonu ferry stops or the Halic metro station of M1 metro line. From all of these points Suleymaniye Mosque 5 to 10 minutes of walk, around 1 km. During this walk, you will see many other historical artifacts between the streets.

Suleymaniye is not a museum like the many other big mosques in Istanbul. It is an active religious pray where is the praying point of the many people who are living in Istanbul. You can visit the mosque during the day except for praying times. Muslims prays 5 times a day generally between 06.00 and 21.00. Each of the praying will take no more than 20 minutes. If you go to the mosque and there is praying just wait a couple of minutes to enter. Only Fridays are the exceptions. Each Friday at noon, there is a Friday praying which takes around one hour. Friday praying will be very crowded. So, you can think to visit the mosque another day.

There is no entrance fee to the Suleymaniye Mosque and it is totally free to visit it. However, donations will be accepted by the official at the mosque for the expenses. If you have you can bring a scarf for your hair or pants for your legs. But even if you don’t have official will give something to you.