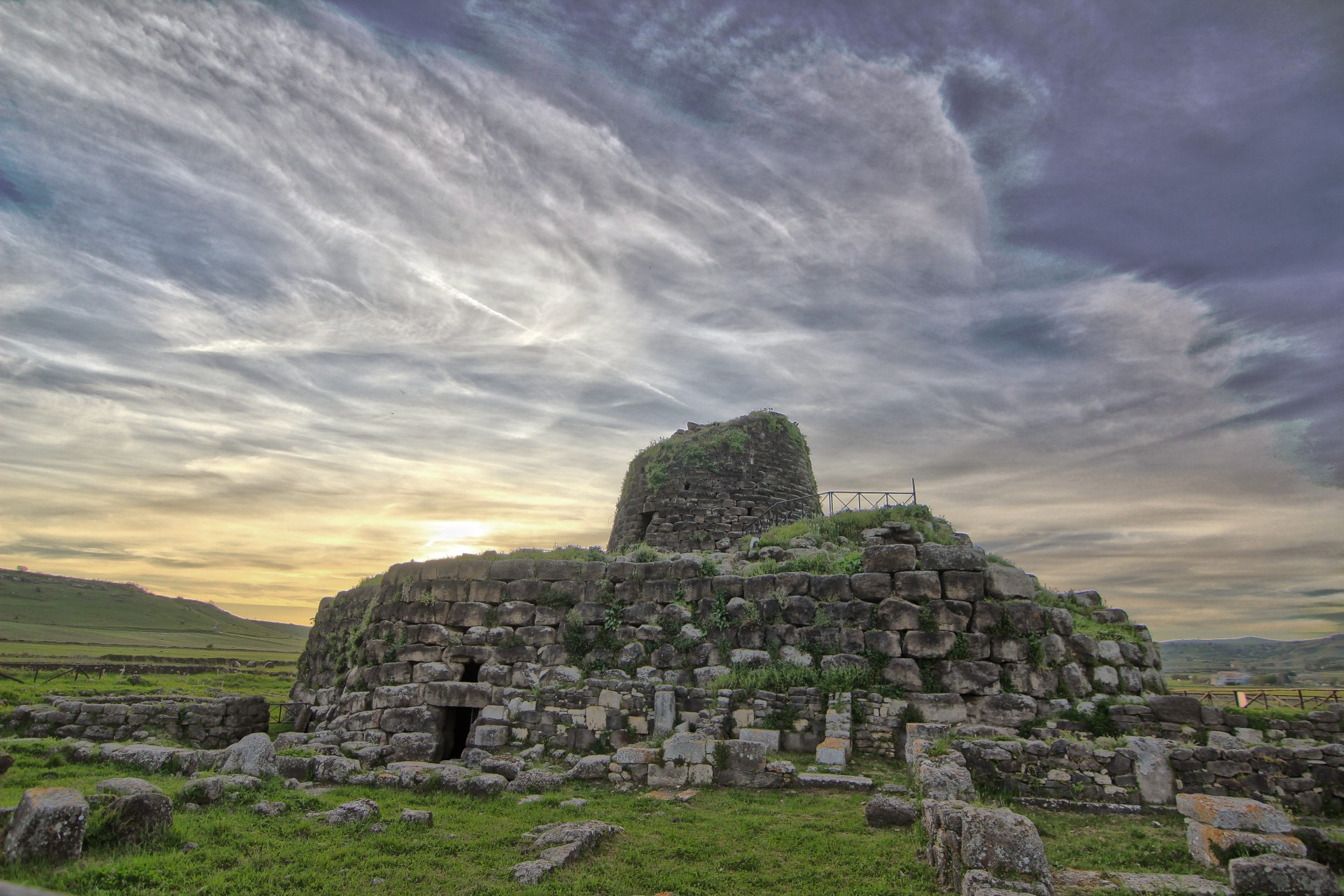 Su Nuraxi di Barumini or Barumini Nuraghi in English is the best place to feel and witness the historical face of Sardinia Island. “Nuraghi” or “Nuraxi” means that a cone-shaped tower built by the carving of the top part of the high rocks. In total, there are more than 8000 Nuraghi in whole Sardinia and the Su Nuraxi di Barumini is the biggest and most iconic of all among them. It is also in the Unesco’s World Heritage List since 1997. Well, if you came to Sardinia to enjoy its stunning beaches and waters, my suggestions are to share some time to visit its other precious treasure like Su Nuraxi di Barumini. If you want to read more about Sardinia please take a look at the Sardinia Travel Guide post. Also, you can use the table below to read the topic you want directly in this post.

What is Nuraxi or Nuraghe?

I think that it will be helpful to give a bit of information about the Nuraghes in Sardinia. Actually, there is no clear consensus oın the origin of the nuraghes in Sardinia.  They could have been the military strongholds or defensive structures, most people thought they were. But of course, there are other ideas like rules residences, temples, villages of the regular people. But some of these nuraghes are located in geographically strategic point all among the Sardinia which points that they are important military building.

At least, they were important for the controlling of the regions, passage or imperative locations. However, they could only the national symbol of the Nuragic people who were living Sardinia between the 18th BCE and 238 BCE until the Roman colonization of the Sardinia. Archaeological studies are still in progress in Sardinia and the total number of the nuraghes is expected to increase up to 10000. Of course, not all the nuraghes in Sardinia is massive and impressive like Su Nuraxi di Barumini. Even some of them is like a small tower as you can see below.

If you want to see the worlds biggest nuraghe. You need to go to the Su Nuraxi di Barumini. Because it is the best known and preserved example for that bronze age of Sardinia Island. It was built on the Barumini region where was the home of the ancient Nuragic civilization of Sardinia more than 3000 years ago! Nuraghes are unique to Sardinia Island. You can’t see any other complex building from Bronze Age anywhere in the world except this stunning island of Mediterranean. Generally, nuraghes are circular building located on the strategic location of Sardinia, probably for the defensive intents. It is also clear that those buildings were improved in time with additional structures.

In Su Nuraxi di Barumini, you will a massive central tower and three chambers connected with each other more than an 18-meter high spiral staircase. And probably you will wonder; How did they build this?! By the way, please try to figure out the layout of the Su Nuraxi di Barumini from the satellite map on the below while reading. The upper part of the tower no longer exists, unfortunately. Also, the main central tower was enclosed with the four smaller towers. This diagonal part of the nuraghe closed by the roof and the access to the hearth of it restricted. And you will see another surrounding wall. On the more outside part of the nuraghe there are circular huts and homes.

Abandonment of nuraghes in Sardinia

Su Nuraxi di Barumini was abandoned around the 6th century BCE but from time to time people used this place to live. However, new huts and homes built but they were different than the original ones. They used a different kind of stones and layout. You may see them when you visit Su Nuraxi di Barumini. Eventually, after Roman reign over the Sardinia, most of the nuraghes in Sardinia abandoned. Romans have conquered the Sardinia around at the 2nd century BCE. Even though, the archaeological evidence shows that the Nuragic people lived on nuraghes one more century until the 3rd century BCE.

Where is The Su Nuraxi di Barumini (Barumini Nuraghi)?

Su Nuraxi di Barumini where is the biggest nuraghe in the world is located in the Barumini region of Sardinia. Barumini is a very small settlement with around 1500 people. although it is so small, it is very famous and well known among the people who are visiting Sardinia Island. Barumini is only 50 km north of the Cagliari and 15 km northeast of the Sanluri. Especially if you are staying in Cagliari it is very easy to go to the Su Nuraxi di Barumini. If you want to go to Barumini by using public transport you have only two option; lines 436 and 501.

Both of the bus lines depart from the same station and arrives at the same station. But the bus line 436 has more stops and take 20 minutes more to arrive at the Barumini. So, it is better to use bus line 436 to go to Barumini if you want to use public transport. If you already rent a car from Cagliari it is time to enjoy the road. You can follow this route which is about 60 km and 50 minutes by car. The other options you may think are take a taxi or joining a tour to visit the Barumini.

You can visit the Barumini by yourself without any guide or tour. Just take the road above by bus or a car and go to the Barumini directly. Su Nuraxi di Barumini is open all along the year without any exceptions. Of course, some part of it may be closed from time to time due to maintenance and archaeological excavations on the site. Before you visit just don’t forget to bring caps, sunscreen and water with you on the summer season. Because it may really hot. However, for the winter and or rainy times, it is better to wear waterproof and anti-slip shoes. You may find the key information about visiting the Su Nuraxi di Barumini.

However, there are a couple of other places you may want to see in Barumini; Church of Saint John Baptist, Palazzo Zapata and Parochial church of the “Vergine Immacolata”. Also, don’t forget to enjoy the local food in Barumini. I think that the best way to explore the Barumini is joining a tour from the Cagliari. Because they will handle everything and give you the correct and detailed information about the Barumini and nuraghe. I just find the top 3 voted tour from Cagliari to the Barumini. Please read them all the reviews before buying any of them. Also share you experiences about them, so I can keep the information on this post up to the date.

This tour will take around 3 hours. They will take from your hotel in Cagliari to the Barumini. Also, you will have a live guide during the tour.However, you will have a chance to enjoy the panoramic views of the Marmilla region. In addition, to visiting the nuraghe, you can visit the Casa Zapata where is an important museum for the archaeological and ethnographic collections of the region. Please your experiences, thoughts and suggestion about the From Cagliari: Barumini Su Nuraxi Guided Tour on the comment section.

Your second option to visiting the Barumini is another tour which is quite longer than the previous one. This tour will take around 7 hours (08.00 to 15.00). By joining this you won’t only visit the Barumini. As you know, Sardinia is also famous for its wild horses. You may have a chance to see those wild horses with also the other animals of Sardinia such as falcons, partridges, birds and more at the Giara Park. All taxes, fees, handling charges, entrances fees, bottled water for everyone and local guide are included in the tour price. However, you will have skip the line option from the separate entrance to the facilities when you join the Cagliari: Barumini and Giara Park Tour.

The 3rd option to visit the Su Nuraxi di Barumini is joining Sardinia: Barumini Nuraghe Tour from Cagliari. This tour will take around 4 hours. Visiting Casa Zapata Museum also included in the tour ticket with entrance fee to the archaeological site, transportation and experiences local guide. There is no hotel-pick up option in this tour. You need to go to the meeting point. It is in the parking space just in front of the Buccari Building. Please don’t forget to share your experience about the Sardinia: Barumini Nuraghe Tour from Cagliari.

If you ever visited The Su Nuraxi di Barumini (Barumini Nuraghi) please share your thoughts, experiences and suggestion to improve the content and quality of this post to be more helpful for the readers. However, if you are looking more to read about Sardinia don’t forget to take a look at the Sardinia Travel Guide or Sardinia’s Top Beaches. Enjoy! Be safe!