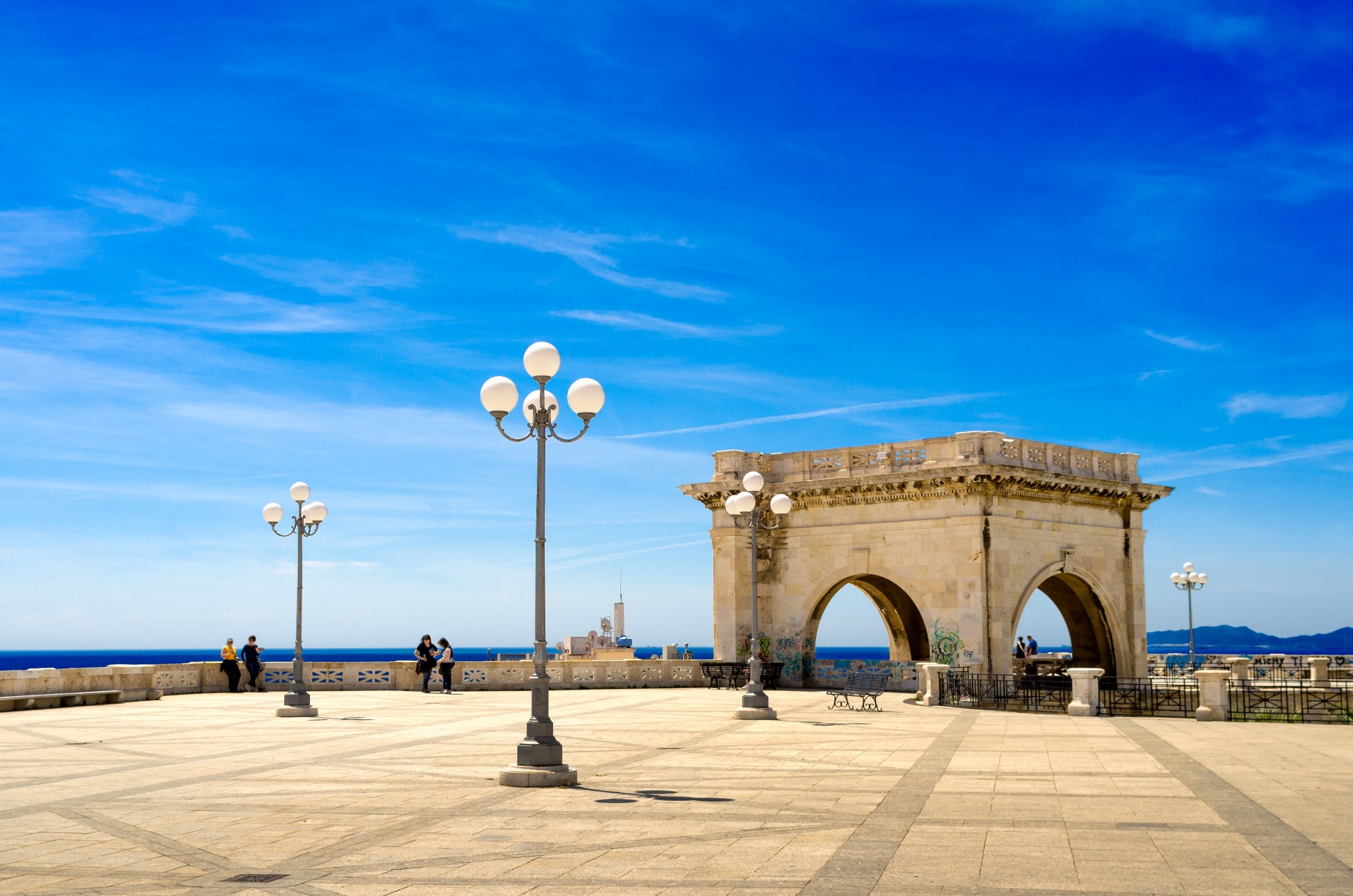 Saint Remy Bastion is a neoclassical heritage of the capital city of the Sardinia Island, Cagliari where you need to see. Because of Saint Remy Bastion is not a regular historical landmark to visit. There are inspiring gallery section, monumental stairway and also a panoramic terrace where offers you a nice view through the Cagliari. This unique historic structure is one of the top places among the tourist who visited the capital of Sardinia Island. If you want to discover the historical places of Cagliari and Sardinia besides its stunning beaches and seas continue to read 🙂

The symbol of the Cagliari where is the capital of Sardinia Island is the Saint Remy Bastion without a doubt. It was built between 1896 and 1902 with a neoclassical architectural style at the old medievals bastions of Cagliari. Basically, Saint Remy was constructed by levelling and reuse of the older Sperone and Zecca bastion located at the same area. Those older bastion built in the late of the 16th century by the Spanish. You will see the column topped with Corinthian capitals which made from the calcareous. Also, there is a main and a quite big stairway at the entrance. It is a long and complex one. The main stairway has two stairs one on the left and one on the right which meet at the same terrace on the halfway up to the terrace. You can see the main stairway on the Google Street View above.

There is a huge terrace where you can see the panoramic view of the Cagliari. Don’t forget to spend some time there to take a look throughout the Cagliari and enjoy the sundown. From this terrace, you can go to the gallery. The gallery is an access point between the large rooms decorated with high arches. This terrace and gallery designed by Giuseppe Costa and Fulgenzio Setti. They used the idea created by the architect Gaetano Cima on 19.th century. During World War II Saint Remy Bastions stairs and arch were damaged during the bombing. All of the damaged parts of the bastion were reconstructed after the war, in 1946. However, Saint Remy hosted the 1st International Sardinia Fair in 1948.

Where is The Saint Remy Bastion?

Saint Remy is the centre of the historical part of the Cagliari. It is like a door from the Villanova district to the old city of Cagliari. Piazza Costituzione where the meeting point of the two major and historical avenues of Cagliari, Via Giuseppe Manno and Via Giuseppe Garibaldi. These two avenues are also the centre for shopping, tasting the local cuisines and also the nice evening walks. If you like to discover cities by walking Cagliari is a very good city for this. But if you want to use public transport to go to the Saint Remy Bastion you have a couple of options for that. There is Regina Elena (Bastion) bus stop just next to the entrance of the bastion. Bus line 6 (Parcheggi Stadio) and bus line 10 (Is Guadazzonis) stops there. If you came to Cagliari with a train from the other parts of Sardinia and want to go to the bastion you just need to take a short walk about 1 km. Just follow this route from Cagliari Train Station to Saint Remy Bastion.

If you want to visit the bastion, terrace or gallery there is only one way to do it. Just going there! There is no ticket, admission or entrance for visiting the Saint Remy Bastion. Also, it is open 7/24 which is very good if you want to watch the sunrise in the early hours of the day. But of course, there are some tours on Cagliari which also covers the visiting the Saint Remy Bastion. A private guide will give you information about the bastion and also the many other building which is included on the tours. You can find the 3 of the tours about the Cagliari on the below. Just don’t forget to take a look at the reviews of the each before buying any of them. Also, don’t forget to share your experiences with the tours.

Please share your experiences and thoughts about both Saint Remy Bastion and Cagliari on the comment section to improve the content and quality of this post. However, if you are looking for a places to visit in Sardinia or read more about the island don’t forget to take a look at the Sardinia Travel Guide.