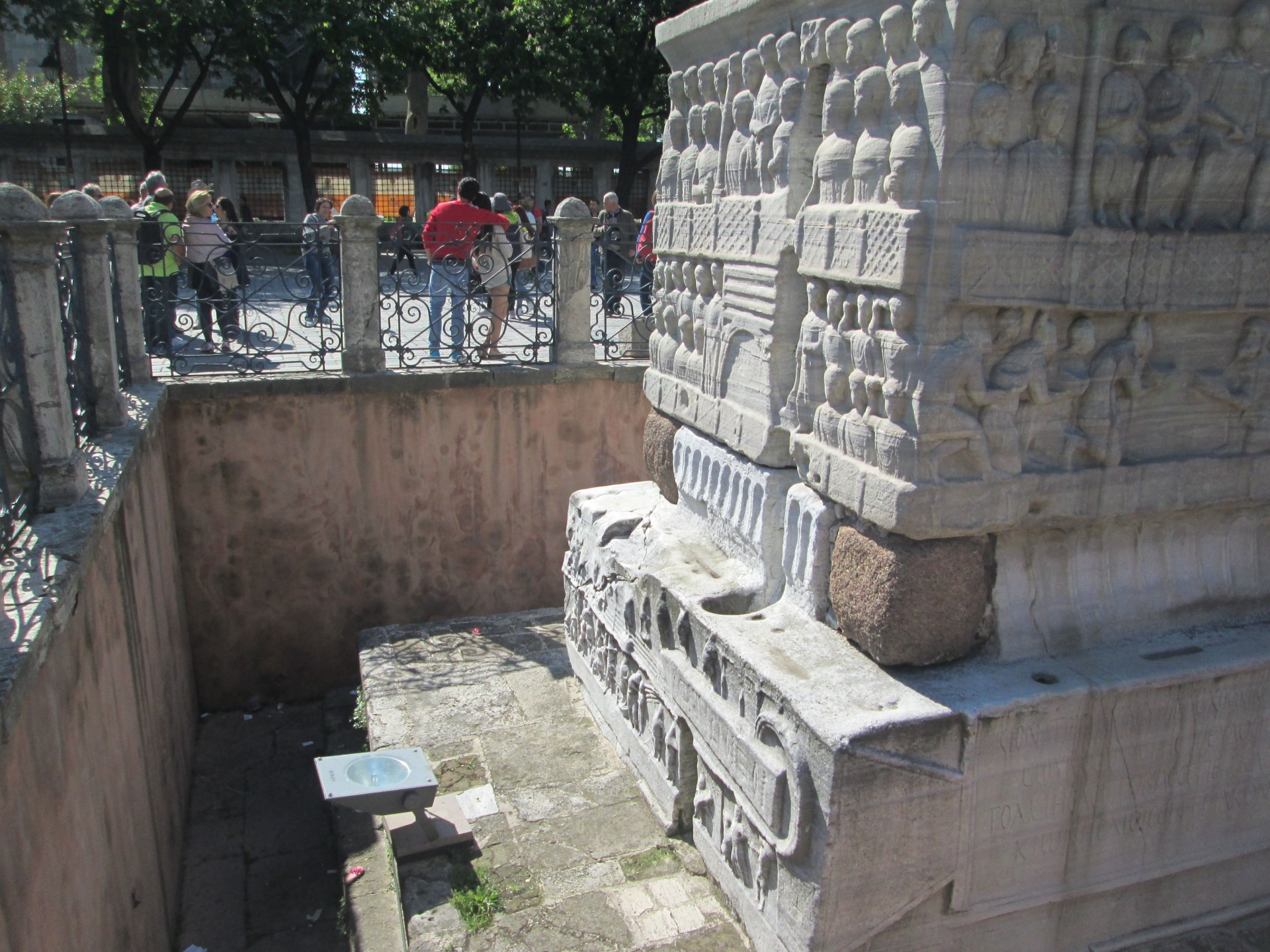 Obelisk of Theodosius: Egypt to Byzantium

Story of Obelisk of Theodosius

The original idea of bringing the obelisk from Egypt to Constantinople belongs to another emperor, Constantius II (BC 337-361). He was decided to bring this 20 meters tall obelisk from its home to the Constantinople.  Obelisk left on the banks of the Nile River after taken from its original location. Emperor Julian (BC 361-363) wrote a letter to the people of the Alexandria and ordered them to bring the obelisk to the Constantinople. This part of the story is a little complicated but there are some thoughts that the obelisk brought to Athens first. Because Emperor Julian was killed in Athens. Finally, obelisk brought to its new home to the capital of the eastern of the Roman Empire. At that time Obelisk of Theodosius was 28 meters tall but now it’s around 20 meters only. Because of some part of it’s gone missing some time.

Journey to the Constantinople

Bringing the obelisk to the hippodrome wasn’t an easy job for the people of Constantinople. Because it weighs around 200 tons. Obelisk brought to the hippodrome through a steel way from the shore of the Marmara sea. At first, it wasn’t possible to put it vertically, so it laid down on the part of the hippodrome for a while. In 390, the governor of the Constantinople  Proclus managed to put the obelisk vertically but it took around 30 days. There are other theories about how the obelisk put to its location. You may buy a book about the history of Constantinople from this link. It may be helpful to read and learn something before you came to this magical city.

Hieroglyphs on the Obelisk

If you take a quick look at the Obelisk of Theodosius you can understand that some part of the obelisk is missing. It not quite clear where the obelisk cut down from some part of it. Obelisk of Theodosius was made from the Red Aswan Granite. It put on the four 47 cm high bronze feet over the marble based prepared by the Theodosius I. There was a bronze sphere over the obelisk that represents the world. But it fell down at the earthquake in 865 and gone missing. On the four sides of the obelisk, there are hieroglyphs. These hieroglyphs didn’t read by the Romans, Byzantines and some part of the Ottomans until 1832.

Where is the Obelisk of Theodosius?

Now, it is located almost the center of the Sultan Ahmet square. Obelisk of Theodosius is very in front of the Blue Mosque and over the Atmeydanı street. Because of its height, you can see it from a couple of hundred meters away from.

How to Go to the Obelisk of Theodosius?

Actually, it is very easy to find the obelisk. Because it is located in one of the most central locations in Istanbul. You can take 30 minutes long from the Emionu ferry stop. This walk can be a little challenging because the route is uphill. But you can also take a tram from the Eminonu and get off at the Sultanahmet station where is very close to the obelisk.

Obelisk of Theodosius is a more than 2500 years old must-to-see monument in Istanbul. You should spare a couple of hours to visit it at the Sultanahmet district. Please share your comment and suggestion to improve the Obelisk of Theodosius post. If you have a question feel free to ask it in the comment section!