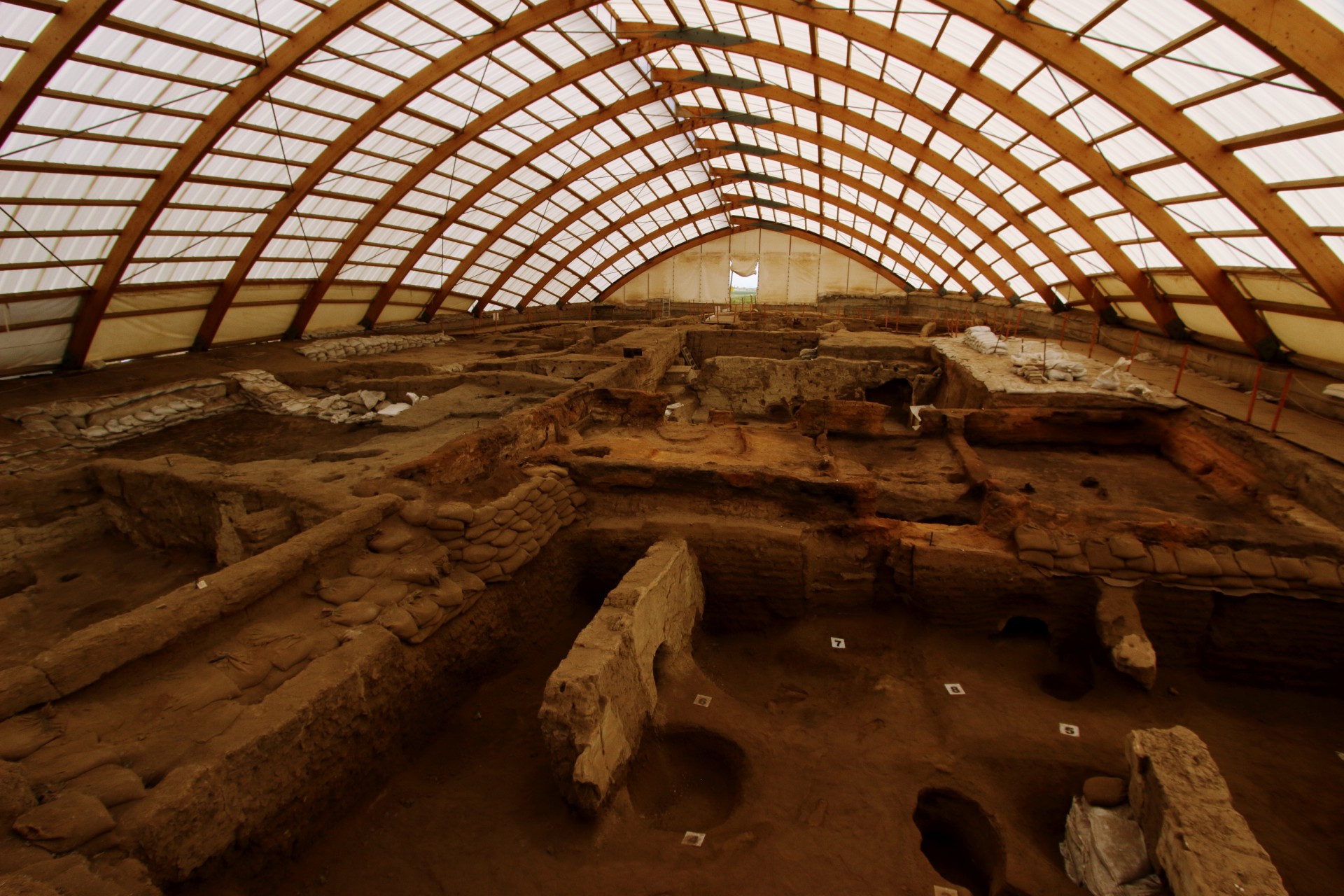 Çatalhöyük: Ancient History of the Anatolia

Çatalhöyük ancient settlement area is one of the worlds oldest Neolithic sites. This is a place so important for the Anatolian history because it almost changed everything about we know about the lifestyle of the early Neolithic communities. Remarkable properties of the Çatalhöyük are huge size of it, the layout of the houses and dwellings and duration of the settlement.

After the 50s, archaeological excavations started in the Çumra village of the Konya city where is almost 35 km away from the city centre. Excavations led by James Mellaart who is worldwide famous, reveal the 9000-year-old Neolithic settlement area, Çatalhöyük. Çatalhöyük is the part of a massive ancient settlement. It is thought that for now only the %5 of the settlement only discovered. Çatalhöyük consists of two mounds, east and west. East mound has 18 different settlement layer dates between BC 7400 and 6200. West mound have remains belongs to the Kalkolitic era dates back to between BC 6200 and 5200.

Dwellings of the Çatalhöyük

Dwellings or the houses have interestingly similar construction style to the conventional building as we can see today. The only difference for the Çatalhöyük is the layout of the settlement. Houses of the Çatalhöyük were about 25 square meters in area, flat-roofed and one living space/room with one storeroom. Each house had a hearth, an oven and a bench. The room was also furnished with different material like wood for sleeping, seating. Today, some of the blocks that used to build the houses are still intact today despite the weathering processes. The researchers thought that burning in the city hardens the block and gave them resistance ability to the weathering. It is better to discover the houses by yourself. You will be amazed about what you at Çatalhöyük.

Çatalhöyük was also the centre of a religious cult. Painting, relics and statuary unearthed during excavation are now in one of the biggest museums in Turkey, Ankara’s Museum of Anatolian Civilizations. It was common to have bullhead almost any house in the city that refers to the vigorous cult of the bull. When you go to the Çatalhöyük you will also see the obese goddesses in paintings and clay figures which indicates an active fertility cult.

I think there is no need to give more details about the area. Because it is always better discover ancient site by yourself. I’m sure that it will an excellent for you to witness the ancient history of the Anatolia and all humanity of course.

When you go to the settlement area you will see three different sections, entrance, north shelter and south shelter. At the entrance of the site, there is an “example/experimental house” to give you an idea about the life of the people of Çatalhöyük. These houses were built by using the mud-brick architecture of the Neolithic village. You can experience daily life in one of those houses. You also know that in the city there were no streets and roads. All the house were nexto each other and people were walking through the roof of the houses. Because they built all the roof flat. There is an also small museum that gives an information about the history of the Çatalhöyük with small items from the excavations.

From here you will see the path that leads to the un-excavated plains of the mound. You will see the North Shelter which covers the excavations and protect it from rain, snow and sun. In here it is very easy to see the shape and layout of the houses and dwellings. When you follow the path to the south you will reach the south shelter where is made the Çatalhöyük worldwide famous. Because in here artistic objects were found during the excavations made the city well-known. By the way, don’t worry, you won’t walk much in here. There are a maximum couple hundred meters between all the sections of the area which is quite easy to walk.

Çatalhöyük is open between 09.00 and 17.00 all year with no exceptions. For now, there are no tickets or charges for visiting the area. There is a cafe with public restrooms you can use. You will also buy some souvenirs from here for your loved ones. Before you go there don’t forget to download Çatalhöyük brochure,  Çatalhöyük Guide Book and Çatalhöyük Site Map.

How to Go to the Çatalhöyük

This part little complicated. Çatalhöyük is only 40 km away from Konya city centre and 12 km from the Çumra village. It is very easy to reach Konya. There are lots of domestic flight to the Konya from Istanbul and Izmir. There are also few flights from Amsterdam and Copenhagen but this flight may be seasonal so it is better to check them. You can come to Konya with also intercity buses from almost any city in Turkey. My suggestions about coming to Konya is using the high-speed train line. You can take the train from Istanbul, Eskişehir or Ankara and directly come to the Konya within couple of hours. It is also very cheap when you compared it to the flight and intercity buses. This one was the easy part 🙂

From Konya to Çumra village and Çatalhöyük is not easy. I think this is a very big negative point for the cultural authorities of Turkey. There are some local minibuses that operate between Konya and Çumra village but there are no timetables or price information about them. So it better to not risk the day. Just rent a car from Konya and drive to the ancient area. There are Hertz, Enterprise and Budget car rental companies in the Konya airport.

Budget has another branch in the city centre. In the city centre, there are also numerous local companies for car rental. From Konya Airport, it will take around 60 km and one hour journey. If you don’t want to rent a car you can always use taxis but don’t forget to talk about the prices before the trip. Also, the drivers probably won’t know the English but when say them the location they will know.

If you ever visited the Çatalhöyük or planning to visit please share your comment, suggestions and question on the below to help others and to improve this guide.